The Superstrata from Arevo is the world’s first 3D-printed unibody bike frame using thermoplastic carbon fiber composites. The fork and wheel frames are also 3D-printed using the same material. The first concept prototype was built in December 2017, and the final design is based on their 6th concept which was built in Jun 2020. This was followed by global launch in July 2020 via Indiegogo. The bike frame size can be customised for riders between 1.4m to 2.2 meters tall, and comes in urban and racing configuration which can be customised to individual needs. The urban configuration also comes with E-bike version for those looking for battery powered bikes. 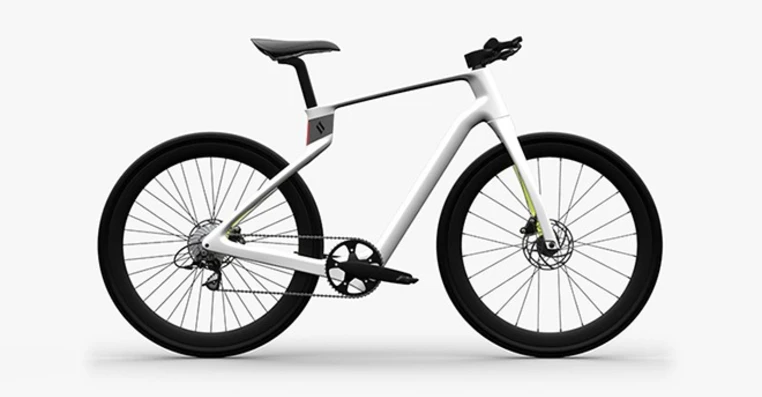 It appears that the main selling point of the Superstrata frame is the weight, which is stated to weigh as low as 1.3kg. When fully fitted in classic racing configuration, the total weight is as low as 7.5kg. In comparison, most high-end racing bike normally weighs between 9 to 11 kg at the same or even higher price range. Even though it is lightweight, the company touted that the carbon fiber is 61 times the strength-to-weight ratio of steel, and 15 times in the case of titanium. The lighter weight may also mean more power savings for the E-bike version and hence more mileage per charge.

The design specification and cost-effectiveness of this bicycle frame is unrivaled at this time…? So we thought, but there are existing bicycle frames at around the same weight range.

One design feature of the Superstrata is the lack of seat tube that exists in most conventional design. This is not new per se, as the first seat-tube-less frame was first produced more than 28 years ago by Kestrel. Back then, we can vaguely recall the feedback from some riders was that they feel the seat-tube-less lacks stiffness (bad) or provide a “softer” ride (good). Either way, we love the curve and unconventional look of the bike frame back then when triathlon was a new thing with aerobars, carbon wheels, and the then famous Zipp frames.

So there is nothing new in the Superstrata design, except for the use of new 3d printing technology? No, they may have the same “seat-tube-less” look but but there is another major design difference other than the manufacturing technology.

The Kestrel 500 (1992) is a monocoque frame which means the structure is supported by the “skin”, that is the carbon fiber. Whereas Superstrata (2020) is a unibody frame which supposedly mean the entire frame down to the inner core is built as one piece to support the structure. Unibody design may be new to bikes but it is the preferred construction method for most cars in the market today.

The Kestrel carbon bike frame has been around for a very long time. The 2019 Talon X (below) is one of the latest model which comes with seat tube and weighs at 8.4kg for a complete bike including Shimano Ultegra components. We do not have the weight of the Talon X frame to compare apple to apple, but if equipped with the lighter weight components, we believe the complete bike can easily get under 8.0kg to match the Superstrata.

Most triathletes in the 90s would already know Kestrel, and wished that we had the budget to buy one of the frame back then. Given the choice today, which bike frame would you choose? Personally I would prefer to pick the Talon X as it comes with the seat tube, and its produced by an established brand with more than 30 years in the bike business. The weight is only 8.4kg and priced at $1999 today, which is comparable to Superstrata price.

Nevertheless, we look forward to see if 3d printed frames do disrupt this industry, and if it will become the new norm for manufacturers moving forward. If yes, we should be seeing more of such design in the competitions, triathlon, Tour de France, etc.