This review compares Fiido X and Rocket Ebikes, which are two projects on Indiegogo that have each received more than a million dollars in pledged funds from thousands of backers.

Rocket eBikes’ campaign ended in November 2020, but the shipment has been delayed to December 2021, which is more than a year since the campaign ended. The project manager has been keeping up with backers’ inquiries in the comment section and has also hinted at quality issues as the main cause for the delay. Nevertheless, the backers are getting impatient, and some have started to ask for refunds so that they can buy other bikes.

On the other hand, Fiido’s campaign is ending on 12 Sep 2021, and they appear very confident to ship out their products by end of September (fingers crossed). They even posted photos of the production so as to give extra confidence to the backers.

Even though the Rocket bikes project is badly delayed, we compared the Fiido X to the Rocket eBike to understand why there are more users that ordered the Rocket earlier.

The Fiido X is significantly smaller and lighter than the Rocket eBike, due to the use of a magnesium alloy frame and lower-powered motor at 250W and 350W (US version). The power-assisted range can go up to 130km (110km for US version) in max. range, and at 19.2 mph for the US throttle version.

The Fiido also has an electric keyless smart lock like some other high-end folding e-bikes, which also acts as a power switch. So whoever steals your bike has to run with 17kg of dead weight. Fiido also has a USB charging port for external devices, and built-in lights.

The Rocket eBike is an all-terrain eBike, which has the following features not found on the  Fiido X.

For the US version, the throttle speed with pedal-assist using the 750W motor. can reach a maximum speed of 28mph and up to 160km in range.

Rocket eBike’s weight may be wrong as the 250 and 750W motors should have a significant impact on the overall weight. By right the geared motor should have a larger torque than the hub motor, but there is insufficient data from both suppliers to clarify this fact. 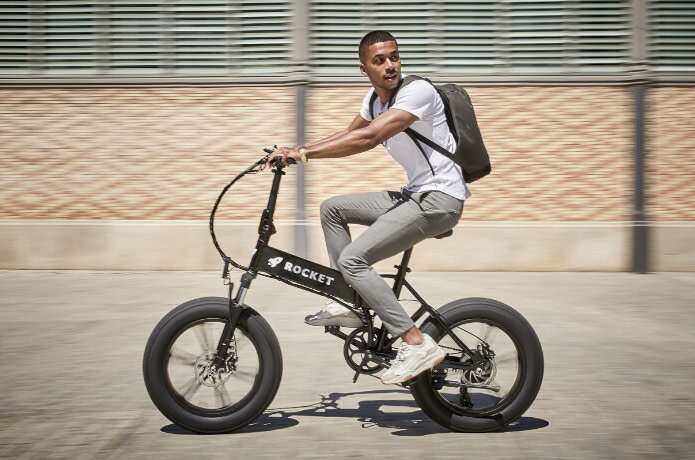 The Fiido X Ebike is suitable for urban cyclists who may need to carry the bike often, such as going up staircases. It is also much smaller when folded up, which saves a lot of space in the car boot or at home.

Assuming that Rocket eBike could finally meet its target ship date by December 2021, it is still a very attractive all-terrain eBike due to its IP rating, front suspension, wide tires, bigger battery, and powerful motors. On top of that, it can also be folded for traveling or storage purposes. If it cannot be delivered, then it sucks no matter how good the specs are.

In terms of design specifications, there is no clear winner in this review and so it is up to the individual to select based on their intended usage.

For those who makes a decision by looking at the fault(s) and ruling out the competition:

Below is a compilation of design specifications for both designs. There are some blanks due to a lack of information.