Beeple is Mike Winkelmann. According to his website, he is one of the originators of the current “everyday” movement in 3D graphics. He is a graphic designer from Charleston, SC, USA who does a variety of digital artwork including short films, Creative Commons VJ loops, everydays and VR / AR work. After he began releasing a set of widely used Creative Commons VJ loops he has worked on concert visuals for Justin Bieber, One Direction, Katy Perry, Nicki Minaj, Eminem, Zedd, deadmau5 and many more. He’s attracted 1.8 million followers on Instagram and high-profile collaborations with global brands ranging from Louis Vuitton to Nike, as well as performing artists from Katy Perry to Childish Gambino.

It all started on May 1, 2007, when Mike Winkelmann decided that he was going to complete an art project everyday. He calls this project “Everdays” and he has not missed a day ever since.

“I saw another artist named Tom Judd who did this a few years back. I thought that was a really great idea and I figured it would be a great way to get better at drawing myself. Since then I’ve used this as a tool to learn about photography and 3D animation as well.”, said Mike Winkelman.

The original objective was to practice drawing and art design for his freelance work.

This is a respectable effort.

Besides helping to get more high profile projects along the way, the first 5000 days combined into one digital art is worth an ultimate reward of $69million. This is a NFT (Non-Fungible Token), which can only be purchased using the cryptocurrency, Ethereum. 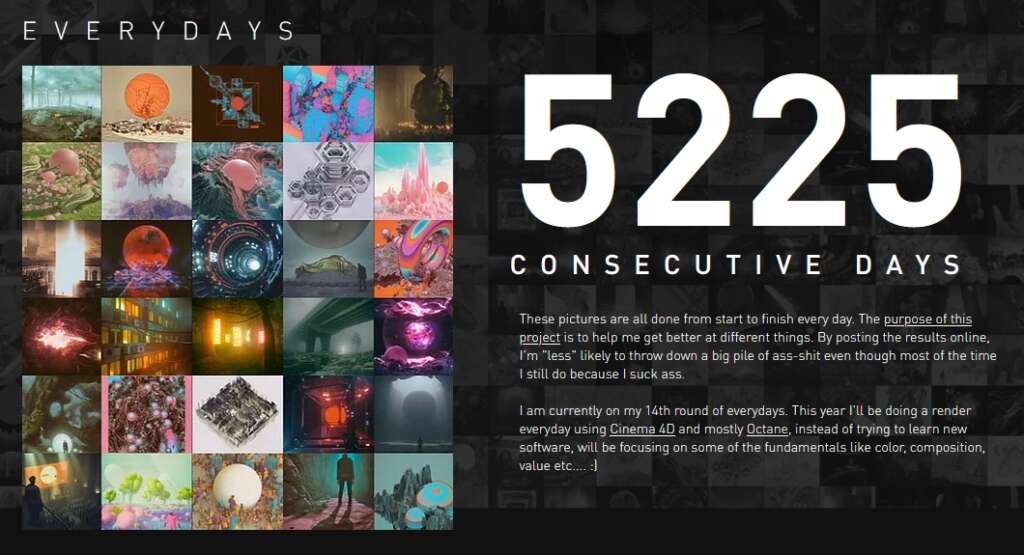 Essay from the Beeple auction:

In EVERYDAYS: THE FIRST 5000 DAYS, the artist has stitched together recurring themes and color schemes to create an aesthetic whole. Organized in loose chronological order, zooming in on individual pieces reveals abstract, fantastical, grotesque, and absurd pictures, alongside current events and deeply personal moments. Society’s obsession with and fear of technology; the desire for and resentment of wealth; and America’s recent political turbulence appear frequently throughout the work.

The notable difference between the pictures from Day 1 (1 May 2007) and Day 5,000 (7 January 2021) reveals Beeple’s immense evolution as an artist. At the project’s inception, EVERYDAYS consisted of basic drawings. Once Beeple started working in 3D, they took on abstract themes, color, form and repetition.

In the last five years, however, his digital pictures have became increasingly timely, often reacting to current events. “I almost look at it now like I’m a political cartoonist,” Beeple explains. “Except instead of doing sketches, I’m using the most advanced 3D tools to make comments on current events, almost in real-time.”

This reminds us of the MillionDollarHomePage. We wonder how much will 10,000 Days be worth in another 13-14 years.

In another sale, Beeple sold a 3d animated short video NFT for $6.6million, paid in Ethereum. It appears that anyone can download the video from the linked page, however, it is the “NFT” that is worth the Ethereum. We are still trying to grasp this concept.

So if you download this video from the website, you only have a “Copy“, and its not the “Original“.

We are also pondering this question: What if Beeple decides to sell off over 70 million dollars worth of Ethereum?